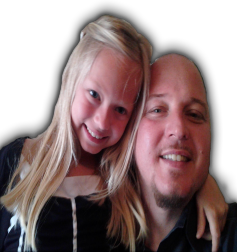 Jason was born in raised on the westside of Jacksonville, Florida. As a child, he was always into cars and lowriders were something he liked more as he became a teenager. Jason grew up with a lot of love and his mother was always telling him about GOD. In spite of her words, Jason ended up letting the neighborhood pull him down. He started hanging with the homies and thugs and got arrested and jailed countless times.

Finally, one day he woke up and realized that God was not blessing him, because of the sinfull ways and disobedience in his life. One night God spoke to him and he broke down standing in the kitchen. Jason repented for his sins and accepted JESUS into his heart, truly this time. Amen!! “Life is way more worth living now since I’m living it for the Lord the way I should”, says Jason.

Jason has a beautiful daughter named Kendal Elizabeth (Walker) Bullard. Jason is the President of FORGIVEN Ministry Car Club, Florida Chapter since the official sstarting of the chapter on January 1st, 2012. Jason owns a 1986 Chevy S-10 Blazer, which he likes to call Kandy 86. Jason adds, “I am honored to be a part of this ministry. Our goal is to reach out and bring people to GOD through the ministry, and also to glorify him.”