Born and raised in Dallas, Texas by a hard working single mother David as a youth ended up getting into a lot of situations with gangs, marijuana and alcohol due to the lack of supervision. He finally ended up dropping out of school at 15 years old and started to work full time from then. In 2004, David joined a well established traditinal lowrider car club and became the Vice President of the club after 2 years. He parted ways with the club soon after getting baptized.
“Shout out to Polo, Big Jr., Lil Joe and the now Regulators”

David was Baptized on May 3rd, 2009 in a small apostolic church in Oak Cliff, TX. His baptism was the start of his transformation into a GOD severing Christian man. After being apart from the car scene for a while David co-founded FORGIVEN Ministry Car Club TEXAS Chapter in late 2010.

David is in the mid building stages of his 1953 Chevy Hardtop Bel-Air. The car is named KINGDOM 53 after Matthew 6:33 (“But seek first his kingdom and his righteousness, and all these things will be given to you as well). This Scripture is the key scripture for David build because it reminds him that before everything. GOD, and his righteousness are First!

Special Thanks to his Lord and Savior, Jesus Christ, his wife Monica, 2 son’s (Jacob and Caleb), mother and all the Homies. 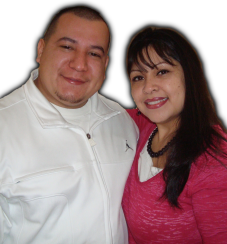 Jesse accepted CHRIST as Lord of his life on July 1, 1999, while he was incarcerated in a Dallas County Jail. He was ministered to on that day by Rev. Dwight Collins, who has become both his Pastor and Spiritual Father. Jesse has attended Risen CHRIST Family Church (www.risenchristfamily.org), where Pastor Collins ministers, since he was released from jail on October 20, 1999.

Jesse is married to his High School sweetheart, Diana Vasquez. They exchanged wedding vows on November 14, 1999. They have 3 beautiful children, Desiree, Jessica and Emmanuel. Jesse and his family currently make their home in the city of Duncanville, a suburb of Dallas, TX.

Jesse received his ministry license and credentials through Risen CHRIST Family Church in 2004 and continues to serve GOD under Pastor Collins as Youth Pastor and Sr. Church Elder over Technical Ministries.

Jesse has served as the Vice President and Lead Minister of FORGIVEN Ministry Car Club since joining in 2010 and was one of the founding members of the Texas Chapter. He currently owns a 1986 Buick Regal, named CHOSEN 86, which is named after the inspiration of Matthew 22:14, “For many are called, but few are CHOSEN.” This verse has helped Jesse in his walk with CHRIST to realize that we are CHOSEN to accomplish the plan and purpose GOD has put in our hearts, however few of us fulfill that plan. The choice is always up to us.